Mapo Kkak Do Gee: Home Cooked Deliciousness Without the Work & Wear on Your Wallet

Every time I go to Koreatown, I realize how much I don't know about Korean food and all the amazing food within reach - beyond the all-too-familiar KBBQ.  And the best thing about it all? You can have an incredibly delicious, foodie-friendly, filling meal the same or just slightly more than you would pay at a fast food or casual dining restaurant. 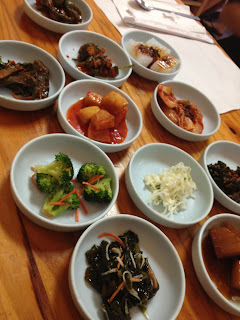 So when dorkyfoodie recommended one of her fav spots in Ktown, Mapo Kkak Do Gee, for dinner a while back - I was excited to check it out.  Sometimes there is an inversely proportional relationship between quality of venue + authencity / deliciousness of cuisine here - and Mapo Kkak Do Gee is a prime example.  Located in a rundown strip mall, within a small space that barely contains a handful of tables with the only decor being large printed menus with photos of key dishes along one wall...Mapo Kkak Do Gee definitely fits in comfortably to the no frills category.

But the food is something else entirely...to start, the collection of banchan or free side dishes that always accompany any korean meal, were fantastic.  I thought I would love the place as soon as I saw muk (sp?) which you don't see everywhere (I think this is jelly cubes made of mung bean topped with spicy seasoning) - confirmed when I tasted its beautifully fresh, light and soft consistency. 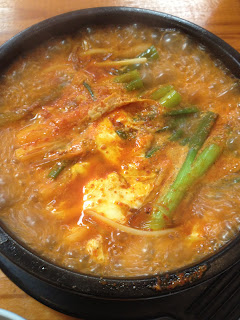 Mapo has a ton of noodles and soup stews on offer - and though I instinctively gravitated towards the seafood varieties like Pollack stew, when I heard that Spicy Beef & Leek Soup ($8.75) is an awesome choice - and I saw the delicious photo - the choice was clear.  It arrived in a black stone pot, sizzling orange and boiling over itself like some potent brew in a cauldron.  The balance of tender meat, crunchy logs of leek and glass noodles was instantly addictive.  And as dorkyfoodie recommended, stirring the free purple rice provided on the side, directly into the soup makes it even more amazing.  This is one I've come to crave and will be coming back for as the weather gets colder. 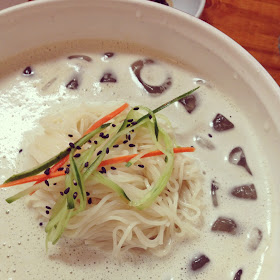 For her main, dorkyfoodie got something I'd never seen or heard of before: Noodles in Chilled White Bean Soup ($8.75) - it came with ice cubes!!  In a giant bowl of very mild flavored noodles in mild flavored soup, served cold like Korean gazpacho.  I'm not sure that I would love this on its own - it's not packed with bold flavor like most people are used to in Korean cuisine - but as a counterpoint to the heat of the Spicy Beef and Leek soup, it was a perfectly serene and soothing yin to the aggressive, riled up stew's yang.
Despite the unfamiliar noodles, there's something about Mapo Kkak Do Gee that feels like home.  I wouldn't say it was the service either, at least on that first visit, though there's a very hardworking and authentic Korean lady in charge - she's not exactly the most friendly to all tables (She was lovely on my return visit, when I dined solo - Korean ladies at the restaurants I've been to in Ktown -actually seem to be amazing about that - really taking care of / mothering single female diners).  I would say it's really the food that feels very homecooked, in the best way - welcoming, comforting, soul-soothing.  No gimmicks - just really well cooked, good food.
And you don't even have to prep, cook or clean - a perfect weeknight meal, in and out, easy.  No pressure to dress up, pair drinks and plan courses and all that jazz.

For those who feel compelled to splurge, there are more spendy items on the menu like the Spicy Seafood Stew ($22.55) and Braised Codfish ($22.55) - but otherwise, a very affordable, great meal that I have already, and will come back for again very soon.