It's not every day that a bartender is deemed by The J Gold as "one of the most interesting" in Los Angeles.  Where many 'innovate' by adding new ingredients to modern classics - e.g. Lycee Martini instead of Appletini - Matt is literally rewriting the book on bartending with his market-driven, culinary, incredibly creative, trailblazing, yet authentic and personal approach. 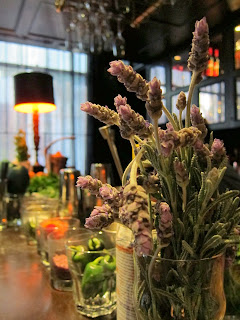 A self-taught talent with no experience working in a bar prior to his current role at Library Bar at the historic Hollywood Roosevelt Hotel (where "every week is like test kitchen") - Matt sort of fell into it after a stint in advertising and catering - 'winging it' after the manager took a chance on hiring him. Matt chucks the rules when it comes to cocktails, drawing inspiration instead from culinary luminaries like Walter Manzke and Michael Cimarusti, local farmers' freshest offerings, and the element that sadly too many others seem to have forgotten - interaction with people across the bar.

If cocktails were works of art, market fresh ingredients would be Matt's palette, and original concoctions the medium through which he creates an intense connection with patrons.  On any given day, his counter is a vision of gorgeous flora, fruits, vegetables, herbs and house made syrups, with a splash of colorful salts and spices for good measure (Matt practically lives at farmers' markets around the city!).  Yet his art is not pretentious - Matt's passion for his craft is clear, and every ingredient or technique he uses is with the goal to create the best culmination of visual / scent/ texture / taste experience for his guests.  We can all tell when someone is just 'showing off', but you don't get that with Matt - what you get is the sense that everything he does is because he genuinely loves / is excited by it, not because of any need to gratify ego.  Matt treats the glass as an artist would his canvas, and a chef would his plate.  He cares a lot about the interplay of tastes and textures, flavor profiles and visual presentation, as any chef worth his salt would.  He also puts a lot of thought into naming his creations, and will use culinary terms like 'amuse bouche' to describe some of his drinks.

Due to his seasonal approach, there isn't really a set 'menu' at Library Bar - so expect the unexpected every time you visit, 'omakase-style' as they say on the hotel website (love that!). In the cozy little nook that is the Library Bar, Matt takes time with guests to find out what they like before getting to work on their drink.

My favorite quote, on this restorative visit on Easter Sunday, is Matt's answer to the few hit or miss feedback he has received: "you don't succeed without failing and by taking risks...truly creative people actually make more mistakes than most people because they take more risks, and I'm willing to do that".  Really respect his no-guts-no-glory approach when it comes to experimenting with new things, from mushrooms to emu eggs to prosciutto to fennel to stinging nettle gin, and sometimes that means drinks that fall flat - but sometimes it leads to pure genius.  Like the three drinks that he premiered for me that afternoon. 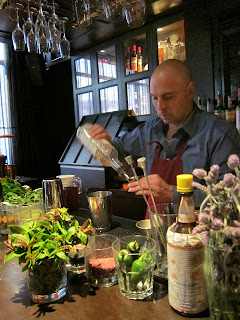 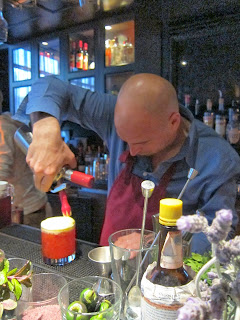 Plenty of articles have been written about Matt's signature drinks Rocket (arugula gimlet), Breeder's Cup (take on Gordon's Cup, served with oysters!), and Last Tango in Modena (strawberry, 25-yr balsamic vinegar, gin, St. Germain elderflower foam, named one of Gayot's Top Ten Cocktails in the US), so I won't repeat here, but I was honored to be there for the debut of his three latest creations! 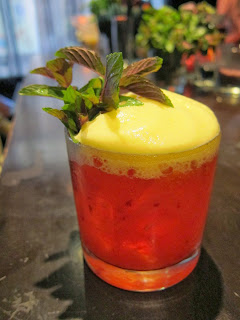 The first of these was the Spanish Rose - organic strawberries are muddled with lime juice, agave, chocolate mint and an exquisite rose geranium water that Matt made himself, and Hendrik's gin, topped with saffron infused St. Germain foam and a sprig of fresh chocolate mint.

This was in a word - fantasmagasmic. I might be a bit biased as this drink contains a few of my favorite ingredients to encounter in food.  But it was a sensory journey with each sip - layers of flavor gradually revealed with the unique taste of saffron in the thick, almost creamy golden foam combining with the fragrant chocolate mint hitting you first on the inhale, before giving way to a light, refreshing, faintly floral and subtly tart & sweet payoff.  The sprig of chocolate mint was a little awkward to balance while tilting back the glass, but worth it for the lovely aromas it adds to the drink. 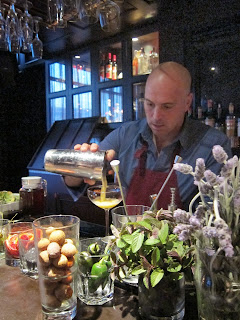 Sparked by Matt's culinary approach to cocktails, I decided to play a quick game inspired by Iron Chef with him.  What three things would he make if I were to give him a secret ingredient of, say, kumquat?

It took him all of a split second to come up with three amazing drink ideas - one of which he sampled for me as my second drink (Mandarino):

2.  Candy kumquats (for use in Old Fashioned): Combine 2 cups water + 2 cups sugar, 40-50 kumquats, simmer 2 hours then take out so that you are left with a nice kumquat sugar syrup (one of many syrups that Matt makes from scratch himself at the bar!).  To make Old Fashioned:  use 1/2 oz of kumquat syrup, add 2 dashes Angostura bitters, 2 oz rye whiskey or bourbon, and 2-3 kumquats as garnishes. 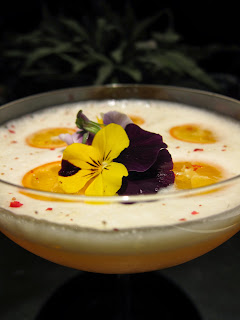 3. Mandarino - kumquat daiquiri.  This one he happened to already be working on at his 'test kitchen' at the bar, trying to find that perfect balance, and made for me to try - it was so beautiful I almost cried.  Here is the recipe:

This drink tastes like a luxe getaway in a cocktail glass - clean  like an ocean breeze, laid back yet sophisticated - I could drink dozens of these in one sitting and never want it to end.  It was love at first sight and sip. 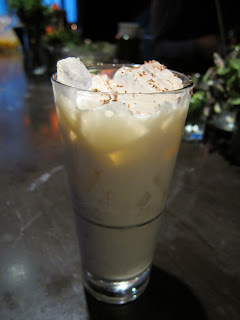 The third and final drink Matt premiered for me was Thai Chai (working title), made with chai tea infused gin shaken with condensed milk and longan (a lycee-like fruit) topped with chocolate shavings.  The chai tea is from Sugarbird Sweets and Teas from the Sunday Larchmont Farmers Market, and tastes amazing with the naturally sweet, tropical flavors of the longan in this refreshing, silky drink that a fellow guest described simply and joyously as "dessert"!  The perfect finish to a lovely afternoon of the best, most refreshing, delicious cocktails I've ever tasted.

Some might balk at the $15 price tag, and drinks at Library Bar are definitely not for the faint of wallet.  But consider the 'liquid fine dining' and personal, pretty much one-of-a-kind experience you are getting for that price.  I've never been this excited about cocktails in general - and I'd even pay that twice over when Matt does his white truffle eggnog again!

Matt's figurative new 'book' on bartending is definitely a page-turner that has me on the edge of my seat.  So what will the next chapter bring for Matt?

He's looking forward to summer fruits / veg to come into season - especially passionfruit - which was also the answer to my question "if you can only eat one thing for the rest of your life, what would it be?" Somewhat poetic, that Matt's favorite thing in the world is passionfruit.

What are his favorite drinks to make with it? Liquid Yoga Campari, aperol, lime juice, agave and passionfruit - because it's bitter, tart and sweet at the same time, and perfect to drink after yoga.  And the artist shines again with his 3 Faces of Van Gogh Cynar, Cassis and passionfruit -  forming 3 faces: bitter from the Cynar, made from artichokes; passion from passionfruit; and sweet from cassis.

He'd also like to have his own farm someday, keep his own bees to make his own honey.  But for now - his star continues to rise, with press feature on CNN actually posted today, and high profile foodie events like Cochon 555 coming up next (partnering with Chef Tim Goodell from Public Kitchen & Bar to compete with top chefs from around the country).  I'm calling it, look out for the duo to make headlines.

More pop-ups pairing cocktails with dinner may be in the future. As well as a continuing barrage of interviews with TV shows, print and online media (and he's still making time for fledgling bloggers - love him!).  And some other big projects in the works, not for me to mention here.

So pretty much get to Library Bar before Matt becomes an international superstar - if you live in LA, I promise you you'll kick yourself later if you don't pop down to get The Biancaniello Experience while you still have the chance!  Matt is at Library Bar off the lobby of the Hollywood Roosevelt Hotel Tuesdays, Wednesdays, Saturdays and Sundays.